It is morning. Air is cooler than yesterday and it is cloudy. Nice walking weather.

Today is ‘cheat day’: I could walk to the starting point, but to save time – as this is only a short trip – I take a taxi to Westergasfabriek. A former gas plant, now arty area, cafes and a tivoli in green surroundings.

Later in the day it is probable crowded. Now there are only a couple of snack bar guests and mothers strolling with prams.

From Westgazwerk I walk south-west along the main road. Residential and commercial areas on one side and on the other side a green area with runners and dog walkers. 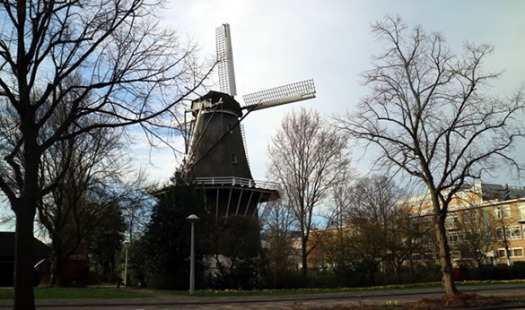 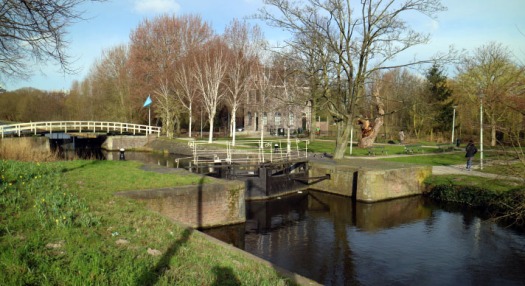 I walk towards the city centre. It is a walk without any particular sights or attractions; flats in red bricks and small super markets and shops …

However, the walk gives a peak into the everyday in Amsterdam and that is nice and very far from ‘touristic’. Also you see things, you would not see if you were only in the center – and get some extra exercise.

Traffic sign: Alcohol prohibited and above that sigh: Smoking cannabis prohibited!
Is Holland maybe the only country in the world with a traffic sign like that?

If you take a closer look, you see many interesting things: Superman lives in Amsterdam.

Gradually there are more and more canals and tiny bridges to be seen. I am back in the Amsterdam city centre. 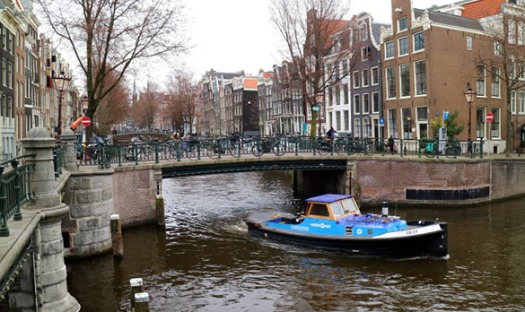 Arty details are everywhere. A stone cat moving up a brick house wall in Leidsegracht. 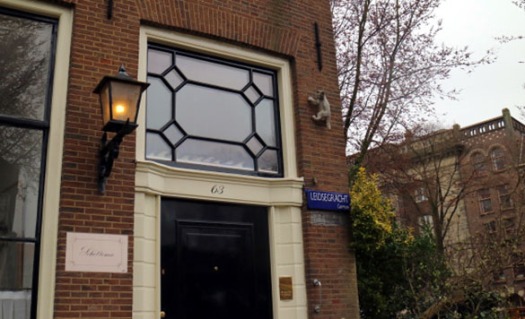 Are the bikes in Amsterdam like those in other countries? Yes and no. They have two wheels, but many, many colours … and there are an abundance of different bikes from 80’s mini-bikes over state-of-the-art road racers and mountain bikes to city bikes.

How many canals and bridges can you shoot before you get bored. An almost endless amount. Water draws viewers (and photographers). 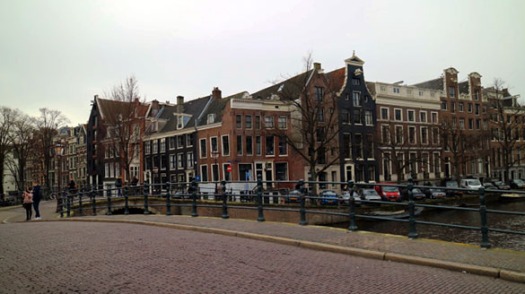 Predictable photo opportunity, Rembrandt Plein, where I had no success in getting af ‘solo’ photo of the great painter … when the Chinese tourist finally stopped filming after 10 minutes an Italian guy rushed in front of the monument.

I pass Club AIR Amsterdam. Holland is the country, that put truly electronic dance music on top of the charts with super clubs and parties and DJ’s such as Tiësto, Armin van Burren, Hardwell and Martin Garrix. Great music (mixes) also for fitness workouts.

Now heading eastwards to the docklands. Behind the naval museum, there is an area with residential and company buildings and old warehouses. 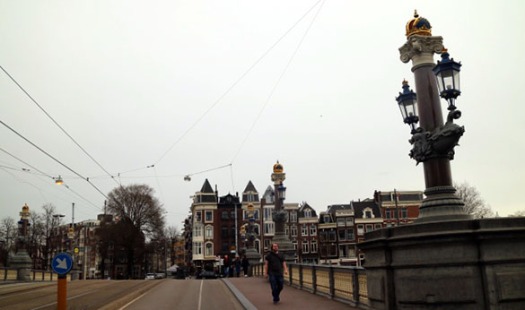 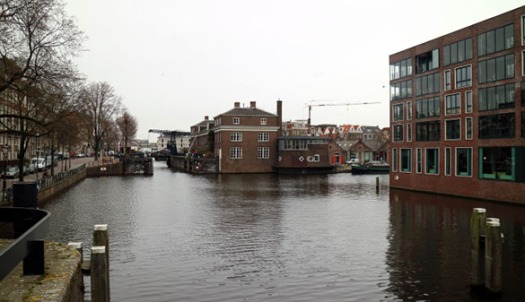 Het Scheepvaartmuseum and a ship from yesteryear marks the ‘entrance’ to the dockland area with Kattenburg, Wittenburg and Czaar Peterbuurt. 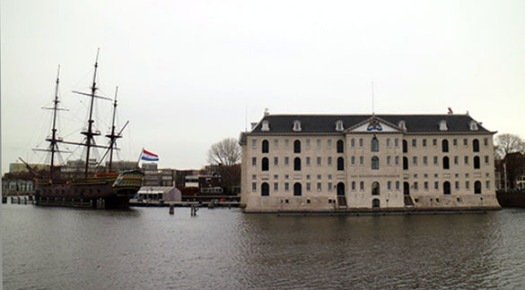 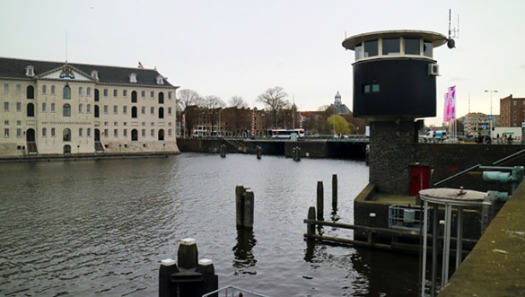 In one of the old buildings you find Amsterdam Roest, the walk destination. It is a bar with live music and a relaxed atmosphere. The bar do not open until 12 o’clock, so a visit inside has to keep for another time (Google maps/earth: Dockland area).

On the way back to the city centre and hotel. More photogenic old buildings. 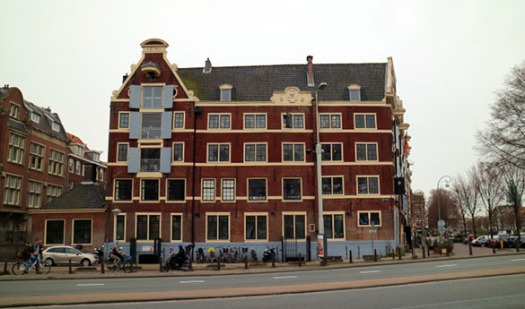 Amsterdam also has an Art Hotel near the central station. I put my footprint on the door mat: I’m not lost, I’m exploring! (Jana Stanfield).

Yet another ‘smokery’, rokerij, a coffeeshop … next to a cannabis shop …

The Dutch are progressive and fit. Apart from biking all over the place, I see many – adults – on scooters, skateboards and this balance-challenging motorized ‘wheel’. 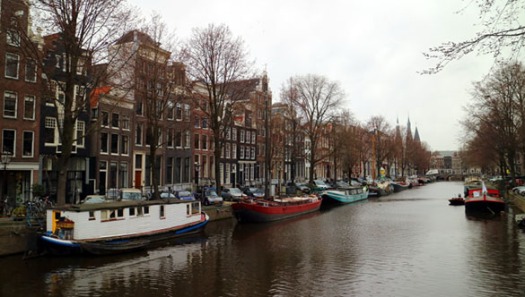 Back in the hotel with the tile-clad reception desks. A cool detail among many. Initially the idea was to build a new hotel, but instead 25 old buildings were bought and restored. 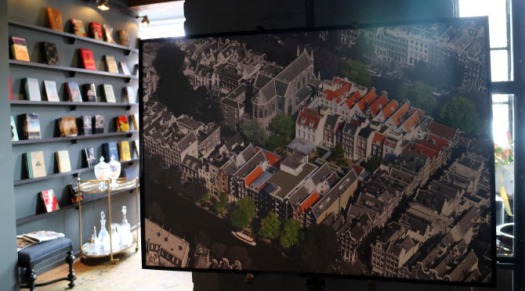 After a lunch break. Back on the beat. A walk in the small streets in the city centre. Among others the Nine Streets, De 9 straatjes, an area with many shops with art and clothes. 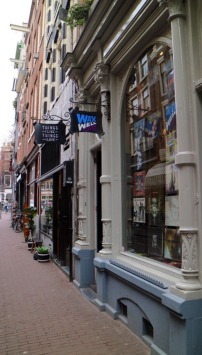 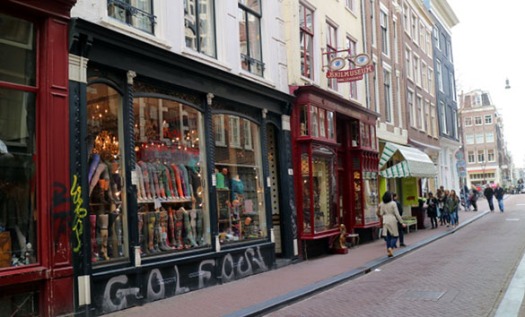 Walking along the Damrak to the Central Station. It is crowded, full of locals and tourists. 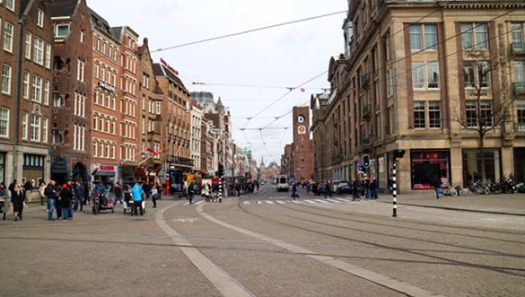 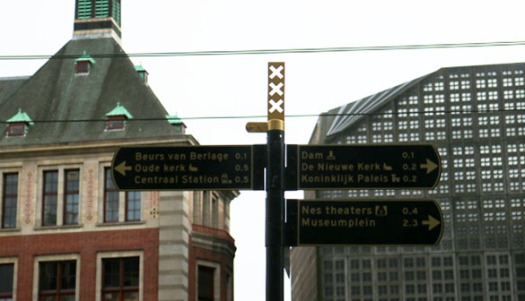 The three crosses seen everywhere in Amsterdam, on stalls, benches, dustbins and T-shirts, are part of the city crest, however, their exact origin is unknown.

I could have walked past it, but saw a photographer lingering. I looked in and discovered a passage, Beurs Passage, with maritime mosaics from floor to ceiling. 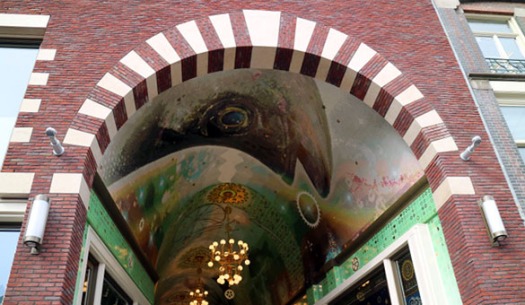 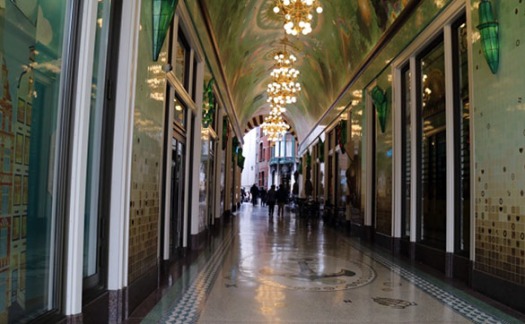 The last looks on the streets, alleys and souvenirs of Amsterdams; an exciting city with everything from old-school til new-school. 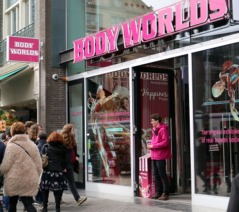 A massive queue obstructs the pedestrian traffic. What is it? Something exciting?
To some probably; It is fries! Voted nr. 1 Holland Fries …

Amsterdam has to be the place in the World, outside of Italy, with the most Vespa’s. They are everywhere. 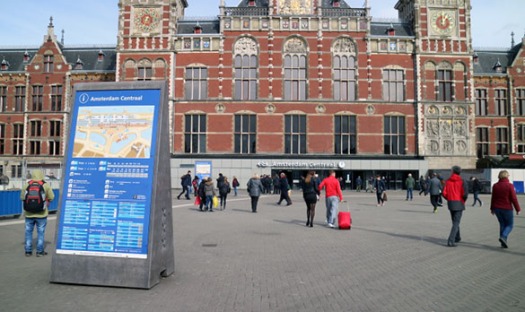 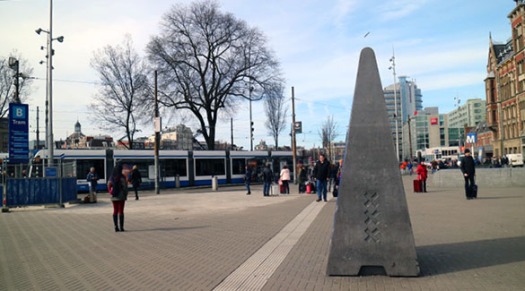 At the Central Station. Buying a train ticket. A friendly greating from the light panel. 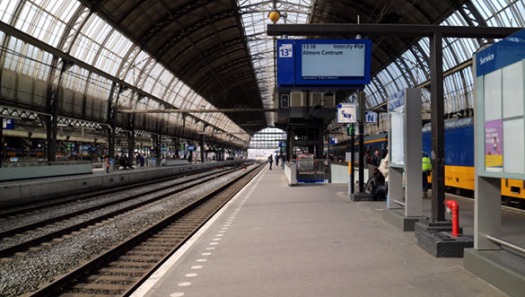 The last glimpse of Amsterdam; Schiphol Airport. It is almost time for take-off. 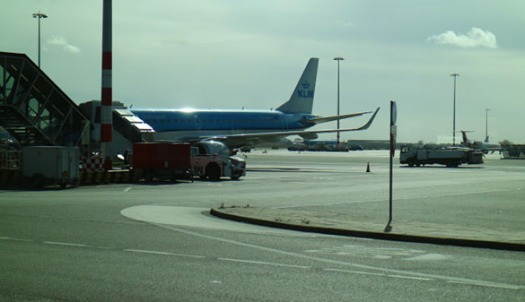 Mission succesful. On the way back in the Cityhopper I note, that approx. 60.000 steps later, I have seen quite a bit of Amsterdam, knowing well that there is much more to see.

Trip by kind invitation of KLM.

2 Replies to “A Club Hop City Walk in Amsterdam: From Nord to West to Zuid to Ost”